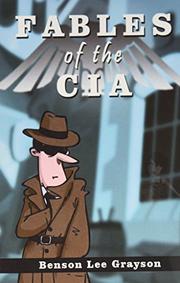 Fables of the CIA

Officers and analysts struggle, whether in the field or behind a desk, in this collection of CIA–centric stories.

Grayson (Strange Science Fiction and Fantasy Omnibus, 2014, etc.) offers only four tales in this book, but they vary in both tone and length. Fortunately, the most exciting story is also the longest, the novella-sized “But Who Pursues?” In it, CIA desk jockey Steve Rogers’ poor job performance is the result of losing his wife and sons. He’s saved from unemployment by pal Mac, who also lands Steve an assignment: tag along with Navy officer George Caruthers to Zurich. Steve, unaware of Caruthers’ objective, is taken aback when the man chains an attaché case to his wrist and hands him a revolver. Things get worse when a bloody Caruthers later returns and, before dying, warns Steve to run. Steve heads back to the U.S. as quickly and covertly as possible, but he’s fairly certain someone’s trailing him, especially once people who try to help him wind up dead. He finally takes the offensive, using funds (courtesy of Caruthers) to buy a newspaper and to hopefully draw out his pursuers with headlines teasing a tell-all article. The story’s rife with suspense; readers, like Steve, don’t know who’s after him, making every character a suspect. The book’s opening tale, “The Station Chief,” is markedly different, an irreverent account of a chief in Senegal, West Africa, so overbearing that agents look for a way to have him transferred somewhere else. In the delightful but straight-faced “The Successful Intelligence Officer,” a by-the-book officer may get the agency to reinstate his terminated recruiting gig by doing something dishonest. “The Intelligence Research Analyst” closes the book with a rather modest tale of an analyst, disgruntled with writing reports, contemplating another position. The author’s meticulous prose works best in “Pursues,” its protagonist appropriately scrupulous in everything he does, including tracking down old contacts or finding places to sleep. Humor, meanwhile, is relegated to the first story and is incongruently off-center: an officer justifies his affair by claiming that he and his wife’s baby was “a monster, with two heads.”

This collection astutely highlights the spy thriller, though the much shorter tales offer solid support.