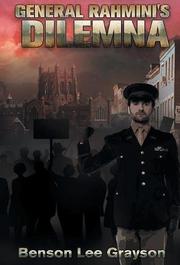 In this collection of two novellas, the conflicted eponymous character faces more than one dilemma.

In the title piece, Gen. Abdul Rahmini, the former chief of counterintelligence under Iraqi President Saddam Hussein, finds himself reluctantly working with the Islamic State group and even more reluctantly being recruited to carry out a suicide mission in America. He’s dead if he manages to slip by U.S. border controls, but as good as dead if he is captured and turned over to Baghdad authorities “who would cheerfully hang him.” But he manages to escape his co-conspirators. Posing as an Episcopalian minister, he winds up in a small Montana town, where he unexpectedly assimilates into the community and falls in love with an American widow. They Call Me the Cobra, an earlier novella, is Rahmini’s origin story; he was a professor who criticized his country’s brutal and repressive secret police in a speech. On the verge of being executed, he is instead installed as the director of the Internal Security Service and given three months to correct its abuses. But as with Michael Corleone, who becomes more brutal than his father, Rahmini ramps up the torture and earns the “Cobra” moniker not just from terrorists, but also his own subordinates. Both of Grayson’s (Fables of the CIA, 2017, etc.) stories have compelling ideas at their core and a strong protagonist. But they are unsatisfactorily dramatized; any suspense becomes undermined by one anticlimax after another. The title novella is the more intriguing of the two tales. It begins as your standard-issue terrorism thriller, but the minister ruse gives the story a Some Like It Hot/Sister Act twist that might have been played for dark comedy. The last third, in which Rahmini ponders revealing his past and illegal status to the woman he loves, would make a potent and timely romantic drama. But taken together, the works do not mesh. General references the murder of Rahmini’s wife and son by “an invading Shia militia unit.” In Cobra, Rahmini has a wife and daughter who survive a bombing of their home. And General is unfortunately riddled with errors (“What did you handle it?” Rahmini asked; “I was...hoist with my own petard”).