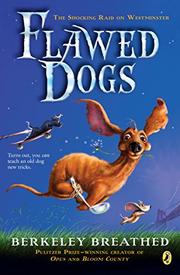 The Shocking Raid on Westminster

Breathed’s fans won’t be surprised by the dark tone of this outlandish tale, but readers expecting a heartwarming pet story may be taken aback by the difficulties that face Sam, the canine hero. Luckily, smooth writing and humorous exaggeration make it relatively easy to get through the violence of a dog-fighting ring, the perfidy of an envious poodle and three long (mercifully undescribed) years in a research lab. Characterization of the humans is sketchy at best, but the various canine and feline players are an endearing mix of odd attributes and engaging personalities (except for the murderous poodle). Sam’s clever plot to infiltrate the Westminster dog show combines the suspense of an over-the-top caper film with the slapstick of the Marx Brothers (Mrs. Nutbush bears a striking resemblance to Margaret Dumont). Clearly growing out of, but not a simple expansion of, the 2003 picture book of the same name, these pups’ tale carries the same message of caring and concern and will likely worm its way into the hearts of readers able to persist through the problems and pain. (Fantasy. 10-14)