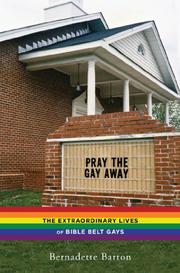 PRAY THE GAY AWAY

Barton (Sociology and Women’s Studies/Morehead State Univ.; Stripped: Inside the Lives of Exotic Dancers, 2006) examines the experiences of gay people living in the Bible Belt.

The author’s tales of gay life in this area of the country, where anti-gay evangelical Protestantism holds sway, range from the harrowing to the mundane. This is not a book about random anti-gay violence; the majority of Barton's subjects were treated more brutally by their own families than by strangers. The author opens by stating that although she has “lived in Kentucky for 20 years, 17 of these in lesbian relationships,” she “had not personally experienced…much homophobia until a spring day in 2003” when, after she told someone that she was a lesbian, he characterized homosexuality as an “abomination.” It is unclear what conclusions readers are meant to draw from this episode, which sounds far less traumatic than much of what her subjects experienced at the hands of their own parents. One thing is clear: Being gay is difficult anywhere, and it's especially difficult in a place dominated by conservative Christian ideology. Barton's subjects' painful stories of rejection by their families and communities, as well as the earnest desire of most to reconcile their personal identities with the faith in which they were raised, are eloquent enough to arouse the sympathy of even avowed opponents of gay rights. The most compelling parts of the book are the lengthy quotes from Barton's intelligent subjects. The author's own voice is less commanding and too littered with academic jargon.

Engaging subject matter and sympathetic protagonists do not entirely compensate for Barton's ponderous prose, but the book is still worthwhile reading for anyone interested in what it means to be gay in an overtly hostile environment.