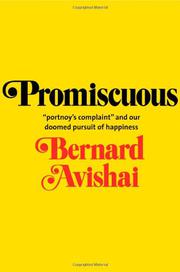 A spirited engagement with the 1969 breakthrough novel that brought Philip Roth both renown and notoriety.

It would be easy to form misleading impressions from this critical analysis of Portnoy’s Complaint. The fact that it’s an academic study from a celebrated university press might suggest that this book would drain all the fun from Portnoy. To the contrary, this critical work, written by a friend of the author, is very much in the spirit of the book to which it responds. Harvard Business Review contributing editor Avishai (The Hebrew Republic: How Secular Democracy and Global Enterprise Will Bring Israel Peace at Last, 2008, etc.) ventures far and wide over literary, philosophical and other cultural touchstones, providing a context for Roth’s novel that encompasses James Joyce, Samuel Beckett, Jackson Pollock and Judd Apatow. Avishai proves both an informed and engaging guide to the novel and its legacy. In a deft turn of critical praise, he writes of the novel’s expressing “the dirt of desire after the hygiene of childhood.” He explains how the novel is very much of its time yet transcends its time, and of how it has been perceived as quintessentially Jewish yet is ultimately emancipating in the way it resonates so far beyond the Jewish experience. Drawing on interviews with Roth and access to his notes, Avishai deals with the issue that has long been central to Roth: the blurring of fact and fiction, of novel and confession. Avishai builds a strong case that Portnoy is not Roth, and that the protagonist might even be the object of the author’s satire, along with psychoanalysis and pretty much everything else the novel addresses. “The joke was on everybody—parents, lovers, tribes, patients, psychoanalysts—which is another way of saying it was on the act of reading itself,” he writes, while elsewhere describing the progression of Portnoy “from a great farce into an unnerving mystery.”

A companion volume that enhances appreciation of the novel.

THE STORIES OF BERNARD MALAMUD
by Bernard Malamud
Nonfiction