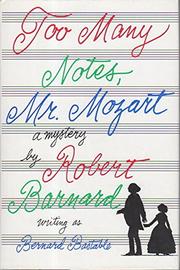 TOO MANY NOTES, MR. MOZART

It's 1830. Salty William IV has replaced his late unlovable brother George IV on the British throne, but Wolfgang Gottlieb Mozart, now a vigorous 73, just keeps rolling along. In Bastable's third installment of his posthumous adventures (Dead, Mr. Mozart, 1995, etc.)—this one rather confusingly presented under the byline of Bastable's well-known originator, Robert Barnard—the aging composer has been engaged as music master to 11-year-old Princess Victoria, who precociously asks him (a wish soon seconded by the deceptively shrewd King) to keep an eye on her mother, the widowed Duchess of Kent, and her Comptroller, Sir John Conroy. But an invitation to Victoria and her mother to visit the King at Windsor Castle upstages the Duchess's possible entanglements, first by the myriad intrigues of the FitzClarences, the King's enterprising illegitimate offspring, and then by the death of Mr. Popper, the Queen's Theater manager who's just paraded Mozart's latest theatrical offering, Victor and Victoria, before the King. Convinced that Popper's poisoned cup was meant for the Princess, Mozart finds himself regarding with the deepest suspicion every member of the royal family who looks down a Hanoverian nose at him. The mystery is dullish stuff. But the young Victoria is enchanting, and Mozart himself (``I have just finished a violin concerto for Paganini. Trying to prevent him writing any more himself'') as effervescent as ever.