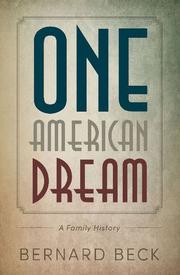 In July 1890, arriving in America from Minsk, Jacob Rubinowitz decided to become Jack Rubin. In this three-generation family story, Jack is the catalyst, and Beck paints a portrait of a man equally admirable and frustrating. After youthful struggles, Jack marries Rose, the daughter of immigrant scholar Ben-Zion Perlman. Jack helps Rose harness her fashion talent. With Jack’s investments, the Rubins prosper and provide a home for Ben-Zion, who grows resentful and jealous as he ages. The intrafamilial tension grows worse as the relationship between Ben-Zion and his precocious granddaughter, Ruthie, deepens. Ruthie, an accomplished writer as a teen, is invited by a publisher to expand a short story into a novel about the Pale of Settlement and its "heritage of pogroms, and life in the shtetle." Ruthie falls in love with her young editor, Harry Berger. Angry objections arise. The Rubins are Orthodox Jews; the Bergers are Reform. Then, Ben-Zion encourages a decision that soon provokes unintended consequences, one aggravated by Harry’s religious conviction growing more fervent. There are references to scholars from Hillel to Maimonides, to social and ceremonial distinctions between Orthodox and Reform Jews, and a précis on cabala. The narrative—driven by Jack’s "gnawing insecurity" of never being "American enough" and Ruthie’s desire to step beyond Old World patriarchy—is seamless and well-paced. The dialogue avoids parody, and the setting provides an informative portrait of the Jewish immigrant experience, enhanced by back story anecdotes of Eastern European Jewish life, all while offering insight into how religion shapes culture.

A novel best enjoyed for its examination of a people and a culture.