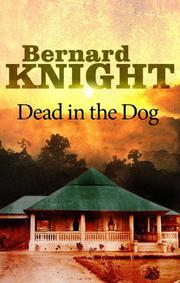 DEAD IN THE DOG

A young pathologist’s national service duties take him to an exotic land and plunge him into a murder investigation.

Commonwealth troops are battling Chinese communists in Malaya—part paradise, part hellhole—but disease is the real enemy for doctors and their patients. As they sit in The Dog, the local hangout for male and female officers and the local rubber plantation owners and their spouses, newly arrived pathologist Tom Howden’s gossipy friend Percy fills him in on the local scandal, much of which revolves around gorgeous Diane Robertson and her unfaithful husband, James. Long rumored to be having it off with his manager Douglas Mackay’s wife, Rosa, James has reportedly turned his attention to nurse Lena Franklin, earning the enmity of her swain, anesthetist David Meredith. Not to be outdone, Diane is having an affair with senior surgeon Maj. Peter Bright. When someone fires on the Robertsons’ house, everyone assumes that the communists were behind the suspiciously small-scale attack. Later, when James is found shot to death in his car outside The Dog, the civilian police and the army confer and agree that they may have to look amongst their own for suspects. Inexperienced Tom’s autopsy shows that James must have been killed elsewhere. Tempers run high, and suspicions extend even to the company commander, who seems to be losing his mind.

Knight (Grounds for Appeal, 2012, etc.) has based the case on his own experiences in Malaya in the 1950s. What it lacks in mystery is more than offset by the forensic and historical details of a little-known war in a faraway world.