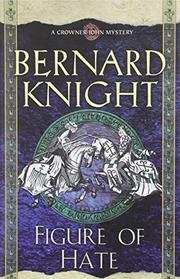 Among the participants jousting for honor at Exeter’s Fall tourney are Frenchman Reginald de Charterai and his adversary, Hugo Peverel, Lord of Sampford Peverel, since his father William was trampled to death last year. After an unchivalrous display, Hugo leaves the field in shame, only to be stabbed several days later. Sir John de Wolfe, the King’s Crowner, is dispatched to resolve matters, which are complicated further by the fact that the late Hugo’s armorer has been accused of murdering a silversmith en route from the tourney. Stymied by Hugo’s three brothers—Odo, who’s subject to fits; Ralph, who wants to be named Lord of the manor; and Joel, who wants to bed Hugo’s young widow Beatrice—Sir John is further flummoxed by the interference of his brother-in-law, Richard de Revelle (Coroner’s Quest, 2004, etc.), by Ralph’s defense of the armorer and by the loathing all the villagers felt for Hugo, a world-class debaucher of virgins, a hanging judge and a coward. Avelina, his father’s widow, even suspected Hugo of causing his father’s death. The one bright spot for Sir John is his wife’s trip to Normandy, leaving him more time for dalliances with his mistress Nesta.

A long-winded campaign with lots of ale-drinking, jibes at clerics and threats of retribution in the name of Richard Coeur de Lion.