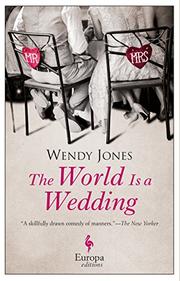 THE WORLD IS A WEDDING

A sequel to the British author’s captivating debut, The Thoughts and Happenings of Wilfred Price, Purveyor of Superior Funerals (2014).

Forget the humorously inflated job description. As Wilfred admits, “undertaking was a simple business of box, hearse, and hole.” Wilfred makes the coffins, and his beloved da digs the graves. It’s the 1920s, and embalming has not yet reached Narberth, the gossipy, self-absorbed West Wales town where both novels are set. The earlier book saw Wilfred weathering a brief, unconsummated marriage to Grace, the doctor’s daughter, and their subsequent divorce. Now Wilfred is marrying his true love, the saintly Flora, whose father he recently buried. The novel also tracks Grace, who in the earlier book was banished from her family home after refusing to reveal who had impregnated her. Grace was no loose woman; she had been raped by her brother. Now she's found work as a chambermaid at the Ritz in London. Wilfred’s role in her downfall will seem murky to new readers, for he's barely discussed it with Flora. Their marriage begins awkwardly; the well-meaning Wilfred knows nothing about a woman’s needs, and Flora feels adrift. If only she could hone her photographer’s skills professionally! Female emancipation is a major theme. In London, Grace attends a Suffragettes rally and learns about women’s self-defense; then her pregnancy forces her to leave the Ritz, and she gives birth in a bakery. Should she emulate her mother’s hardness of heart and leave her son on a doorstep? While Jones moved confidently from light to dark in her debut, here the narrative zigs and zags at the expense of character, while scenes of boisterous fun among the Narberth townsfolk are a jarring distraction.

The resolution, which involves witchcraft and violent melodrama, is likely to disappoint admirers of the author’s debut.