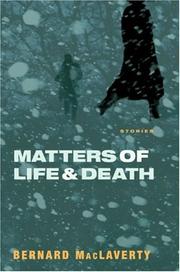 MATTERS OF LIFE AND DEATH

The title piece, delivered in two parts titled “Learning to Dance” and “Visiting Takabuti,” concerns lessons of loss. Two young boys stay with glamorous parental friends while arrangements for their father’s funeral are made. In “Learning to Dance,” the eldest brother’s perceptions deftly mirror the grief that well-meaning gestures seek to blanket; and “Visiting Takabuti” shows an elderly woman, who lost her only love in WWI, trying to demonstrate to her grand-nephews, by way of a museum mummy exhibit, the soul’s way of bidding adieu. In “The Wedding Ring,” the body of a sheltered Irish virgin killed in 1904 is found and discovered to have been secretly married. Although readers may cheer a woman’s cool-headed way of avenging her rape in “Up the Coast,” forays into her assailant’s skewed consciousness verge too closely to Cape Fear–type melodrama. The most moving story (“The Clinic”) imparts Chekhovian insights to a day of diabetes testing. “A Trusted Neighbour” exposes the naïveté of the narrator’s assumption that religious tolerance reigns in his Belfast neighborhood through the inexplicable treachery of the bland motorcycle-rider who lives next door. “A Belfast Memory” reads like nostalgic fluff until the bitter gall of a soccer team’s persecution bubbles up during a Sunday afternoon tea. Belfast is also the setting for “On the Roundabout,” which details a family’s rescue of a Protestant mistaken for a Fenian, and for “The Trojan Sofa,” about a scheme to burgle Orangemen’s homes. An aged woman is consigned “only temporarily” to a nursing home in “The Assessment,” a finely rendered tale marred by overly familiar subject matter. When a Scottish poet-in-residence at a Midwestern university gets lost in a blizzard (“Winter Storm”), unintended echoes of a Garrison Keillor riff and a pat ending undermine the subject matter’s gravitas.

Despite some rough patches, a strong collection embodying the seasoned skill of a master.