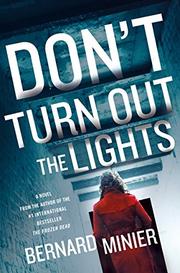 DON'T TURN OUT THE LIGHTS

In a frigid forest on the border between Poland and Belarus, fever dreams assail Martin Servaz as he struggles to get to safety.

Meanwhile, in Toulouse, France, radio host Christine Steinmeyer finds a suicide note in her mailbox on Christmas Eve. There's no address on the envelope and no stamp, so Christine is convinced that the letter was meant for someone else in her building and was left in her mailbox by mistake. She becomes obsessed with figuring out whom the letter was meant for, so they can try to save the writer's life, but has no luck. The next morning, she finds a profane Christmas message written in frost on her windshield, and later that day, a mysterious caller to her radio show accuses her of heartlessness: "It doesn't bother you that you let someone die?" he asks. Shorter chapters continue the perils of Servaz, who receives a hotel key and a summons to “a meeting…in Room 117.” Christine receives anonymous threats against her fiance, Gérald. Pieces of the puzzle slowly come together as the two storylines edge closer. Servaz, we learn, is a Toulouse detective returning after a bout of depression. Gérald decides that he’s had enough of Christine’s erratic behavior and breaks it off with her. Servaz receives a valuable diary; Christine is betrayed by someone she trusts. Ultimately, she needs the help of the detective she’s never met to slay the very real demons that are tormenting her.

Minier (The Circle, 2015, etc.) builds suspense with tantalizing teaspoons of menace and a narrative crafted with believable immediacy. Both protagonists confront their nemeses with a determination that should hook readers and keep them hooked.