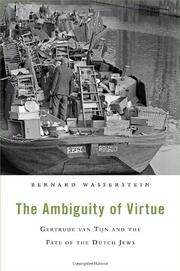 THE AMBIGUITY OF VIRTUE

Gertrude Van Tijn and the Fate of the Dutch Jews

Was she a heroine or collaborator, a saint or sinner? How should we view Gertrude van Tijn (1891–1974), a woman tasked with saving Jews from the Nazi’s gas chambers?

In an attempt to understand her motives and actions, Wasserstein (Emeritus, Modern European Jewish History/Univ. of Chicago; On the Eve: The Jews of Europe Before the Second World, 2012, etc.) takes a close look at the background and behavior of his subject. He gives readers not just a personal portrait of van Tjin, a bourgeois German Jew who embraced Zionism as a young woman and acquired Dutch nationality upon her marriage in 1920, but also a stark picture of the plight of European Jews before and during World War II. After the Germans occupied the Netherlands in 1940, van Tijn, who had been working there for the Committee for Jewish Refugees, found it taken over by the Nazi-controlled Jewish Council of Amsterdam. When the council sent her to Portugal with the mission of arranging overseas transport of Jewish refugees, her role in the registration of Jews, who instead of being transported were rounded up and sent to concentration camps, has raised questions, which Wasserstein examines here. He sees her story as a study in the ambiguity of virtue, and while he acknowledges that her reputation would have been better had she resigned from the council early on, he argues that the failure of her mission lies elsewhere. While the actions of the Nazis, the complicity of the Dutch, and the immigration policies of the American and British governments may be familiar to many readers, Wasserstein includes one less-well-known and fascinating story: In 1944, a group of more than 200 Jews from Bergen-Belsen were exchanged for Germans being held as enemy aliens in the British mandate of Palestine; van Tijn was one of them.

A scholarly, thoroughly documented work that elucidates historical issues and explores moral ones.