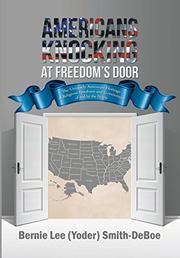 A debut book explores U.S. immigration policy from the perspective of the nation’s historical and religious character.

Immigration has always been a contentious topic in the U.S., and the most searching discussions often revolve around the constitutive components of American identity. In her book, Smith-DeBoe provides a broad historical perspective in an attempt to capture the nation’s core character, or the “American DNA.” She begins with biblical history—with special emphasis on the story of Noah’s Ark—and traces the human race’s genealogy through successive tribal permutations. Immigration debate usually takes its bearings around ethnic, national, and cultural diversity, but the author is first interested in establishing the common ancestries of humankind. This is also an account of Christianity’s birth, and Smith-Deboe tracks the arc of the religion’s development through the Middle Ages and Reformation period to the religious oppression in Europe that partly inspired the original wave of migration to America. Then the author’s attention turns to America’s formation out of its fledgling colonial phase and the essential role religious faith played in the nation’s establishment: “There were different protestant communities and some imposed their way of life and views on others once they arrived in the colonies, but no one can question the fact that America was begun by people who honored God and set their founding principles from the words in the Bible.” Smith-DeBoe contends that the country’s shared Judeo-Christian heritage—the core of its “DNA”—must be the guiding principle of any reasonable immigration policy. The book concludes with a reflection on the author’s Amish background, which at first seems misplaced but turns out to be a provocative reflection on a people who have successfully combined a spirit of countercultural separatism with deeply felt patriotism. This is an eclectic work, and the author is to be credited with an effort to liberate immigration debate from myopically partisan talking points. The sweeping yet brief history of humanity is unnecessary to make her essential arguments, and the book probably should have begun with the discussion of Christianity in early modern Europe. In addition, the culminating chapter on immigration doesn’t provide nearly enough specific policy guidance. But Smith-Deboe makes about as powerful a case as one will find that America’s religiousness is not only important, but also consistent with its political secularism.

Overly panoramic in breadth but still a worthwhile contribution to the immigration debate.