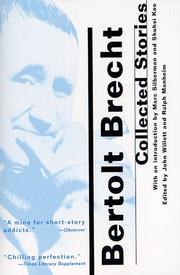 This illuminating collection of 37 crisp, economically turned stories is the first US publication—on the occasion of Brecht’s centenary—of a volume that originally appeared in England in 1983. It’s a welcome display of the great playwright and poet (who was also, like Pirandello and Strindberg, a masterly writer of fiction) in several of his less celebrated roles: as sharp-eyed analyst of social and political life in Berlin between the World Wars (—The Monster,— —The Job—); mischievous historical revisionist (—Socrates Wounded—); and purveyor of commercial detective stories (—A Question of Taste—). A few stories (—Four Men and a Poker Game,— —Safety First—) adumbrate plays to come, and at least one—the unfinished —Life Story of the Boxer Samson- Kîrner”’suggests that this truly protean man of letters might well have become an important novelist as well.