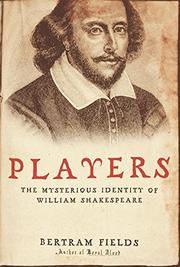 Hollywood entertainment lawyer Fields (Royal Blood, 1998; aka D. Kincaid, The Lawyer’s Tale, 1992, etc.) dabbles in literary criticism by sifting through the elusive evidence of Shakespeare’s probable identity, in a compelling work for the lay reader, woefully lacking in documentation.

Two puzzling identities fail to square in this long-standing literary mystery: The “Stratford man,” as Fields calls him, who hailed from provincial Stratford-upon-Avon, probably didn’t receive more than a grammar school education, married young and left his family to become an actor of some repute in London before returning home to die in relative obscurity in 1616; and the author of the Shakespeare canon, who demonstrated a vast knowledge of foreign lands, history, languages, military and legal affairs, and arcane and insider usages available only to the aristocracy. Patiently, Fields lines up the key issues in the debate—the Stratford man’s will, the mysteriously funded Stratford monument, the publication of the First Folio in 1623—and attacks them from both sides, the “Stratfordians” versus the “anti-Strats,” scholars who’ve been obsessed with this very matter throughout the centuries and whom Fields names occasionally, though without offering specific works or notes. After a blazing excursus through Stuart Tudor history, he examines the evidence of what the Stratford man knew versus what Shakespeare knew, the Stratford man’s nearly illiterate handwriting, the sexual orientations of the two, and their “outlook” on religion, politics and life in general. The Stratford man makes a poor showing, indeed, and though Fields claims to withhold judgment until all the evidence is in, he makes a most striking case for Edward de Vere, Earl of Oxford. He also presents cogent chapters on other plausible candidates, even Queen Elizabeth. His theory of the true authorship is dazzling but fails to consider how, with so many conspirators in the mix, the truth could have been kept from leaking.

Amateurish, sure, but if with this, Fields can turn America’s attention from entertainment gossip to Shakespeare, more power to him.