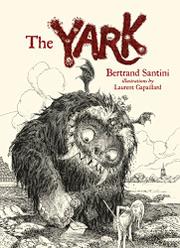 The Yark, a child-eating monster tormented by dietary restrictions, struggles against consuming the good-hearted Madeleine.

Santini upends the old “be good or monsters will get you” admonition: the Yark’s delicate digestion necessitates eating only good children, which are increasingly scarce. After returning from the North Pole with Santa’s list of good and naughty children, the Yark’s attempts to consume Charlotte and then Lewis are thwarted. An omniscient narrator conveys the monster’s inner turmoil in present-tense prose replete with folkloric motifs. Well- and badly behaved children, a beast’s primal internal struggle between natural impulses and civilizing behavior, and the power of a young girl’s purity of heart make appearances. Propelled by supersonic digestive distress after mistakenly eating Lewis’ mean brother, Jack, the soaring Yark crashes into an old lighthouse (the symbolic tower of folklore), where Madeleine befriends and cossets him. Her love for the beast verges on the masochistic. “Distressed at the thought of him going away, she offers her hand….‘Take a bite! Just a few fingers! I have plenty….Eat a few if it will calm your appetite!’ ” Fleeing, the starving Yark lands amid a horde of abandoned wild children, whose tormenting behavior occasions their own demise, the Yark’s subsequent, adaptive redemption, and his reunion with Madeleine. Gapaillard’s beautiful drawings set the emotive, toothy Yark into moody, cinematic landscapes and intricate interiors. Most of the children the Yark encounters appear to be white.

At turns comical, ironic, and unnerving.