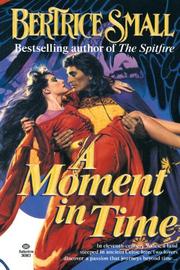 A MOMENT IN TIME

Romantic twaddle that Small easily spins, with fantasy amid an airy narrative with the expected yodel of hyperventilating sex. Set in 1060 Wales, this details the adventures of a Welsh lass of high degree who will suffer various physical humiliations and have two husbands, one of whom changes shape when occasion demands. Quite beautiful Wynne has refused offers of marriage in order to remain at her castle to manage things for its heir, her young brother. But she narrowly evades marriage with one lord when another arrives—Madoc of Powys, who, she discovers, has been a companion all along, in the body of raven chum Old Dhr. Madoc sheds wings, and they marry; but when Wynne is pregnant, the dodo decides to visit her evil brother-in-law Brys to patch up the brothers' quarrel. Promptly popped into slavery, Wynne finds herself the property of a Saxon lord, Eadwine Aethehard. Madoc's son is born, and then, while Wynne discovers she loves the Saxon, she bears him a daughter. But Eadwine dies, and another nasty sends Wynne on the S&M road again. She and Madoc will reunite but...well, this time winging it just won't work. In between Wynne's trials, there's a prophetic drama involving the fairy Fair Folk, and, in the epilogue, dated 1805, the fate of two more lovers is sealed. More popular diddly-squat, quite popular, from Small (Lost Love Found, 1989, etc.).