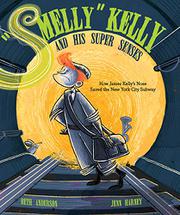 "SMELLY" KELLY AND HIS SUPER SENSES

Gifted with a literal nose for trouble, James Kelly arrived in New York from Ireland “with nothing but a suitcase and a keen sense of smell”—and leveraged the latter into a long career over the first half of the 20th century sniffing out dangerous gas, water, steam, and other leaks in the subway system and elsewhere. Along the way he solved mysteries (“the most nauseating, nose-scrunching stench ever to hit the subway,” detected at the 42nd Street station, turned out to be caused by a buried deposit of circus-elephant dung beneath the site of the old Hippodrome) and averted several potential disasters. Anderson casts him in a heroic mold, as he had not only a special ability, but the inner motivation to use it in service to public safety: “With such an honor came great responsibility.” (Shades of Spider-Man.) Depicted with a confident smile and a mop of bright orange hair, Kelly shines as he goes after suggestive twists and curls of miasmic yellowish green in the illustrations’ succession of antique-looking street scenes and cross-sectional views of underground pipes and tunnels. Harney tucks a dark-skinned couple into a line of subway riders, but otherwise human figures present White throughout. In a set of endnotes the author adds a portrait photo, describes some of the specialized gear that Kelly invented, and closes with leads to more information about New York’s underground. (This book was reviewed digitally with 11-by-18-inch double-page spreads viewed at 77 % of actual size.)

Another immigrant gets the job done.