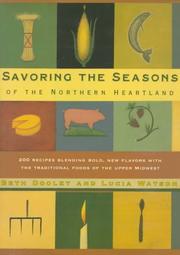 SAVORING THE SEASONS OF THE NORTHERN HEARTLAND

This 14th entry in the Knopf Cooks American series is top- notch (even Knopf's trademark borzoi has gotten into the spirit, sporting a jaunty toque). Cookbook writer Dooley (Peppers, Hot and Sweet, not reviewed) and Watson, owner of an eponymous restaurant in Minneapolis, update regional favorites with sensible revisionism. Our guides present foods from Minnesota, Iowa, Wisconsin, upper Michigan, and eastern North Dakota that reflect varied northern and eastern European immigration, cold weather, long distances between homes, and—as in the case of a pliant white bread using leftover mashed potatoes—the sturdy, thrifty values for which the Midwest is known. Along with the clear, extremely functional recipes are bits of information about such local delicacies as lutefisk (preserved codfish brought over from Norway) and the ice cream sundae, which was invented in Two Rivers, Wis. One entire chapter is devoted to ``hot dishes''—one-dish meals popular for church suppers and other informal gatherings; and alongside the traditional chicken pot pie, Dooley and Watson offer innovations like roasted vegetable strudel. Even a standard leftover meat casserole is perked up with caramelized onions and cognac. Likewise, dairy and egg options include blintzes that would not have been out of place in a turn-of-the-century kitchen though pepped up with fresh corn in the batter and fresh basil in the ricotta and Parmesan cheese filling. Hearty, homey eating, imbued with today's wisdom. Even coastal snobs will be dashing to the kitchen. (75 b&w illustrations, not seen)