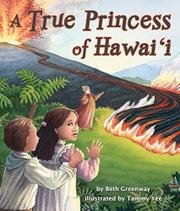 A TRUE PRINCESS OF HAWAI‘I

History mixes with folklore in this story of the Mauna Loa volcano.

In July 1881, Princess Luka traveled to Hilo to reverse the flow of lava from the volcano, an event that provides the foundation for this tale. Little Nani, who wants to be a princess herself, is excited about meeting a real princess. On the way to the harbor, Nani has a strange encounter with an older woman in a white sleeveless dress and lei of reddish flowers, more traditionally attired than the townspeople in their Western clothing. When the old woman asks for something to eat, Nani shares her candy. Nani also provides candy for the balky horse that pulls the wagon that will convey the unusually tall Princess Luka to the volcano, and she supplies a piece of red fabric torn from her petticoat needed by the princess to “appease Pele,” goddess of the volcano. Luka is successful, the lava is stopped, and Nani has yet another meeting with an unknown woman, this time a younger version of the woman in the white dress: it is Pele. The detailed watercolors are sometimes a little stiff and clumsy but give a good sense of 19th-century Hawaii. The story is a little more problematic, with its interjection of folklore and the personification of Pele. Information about volcanoes and Princess Luka is appended.

Generosity, princesses, volcanoes, deities—maybe there’s too much packed into this story.