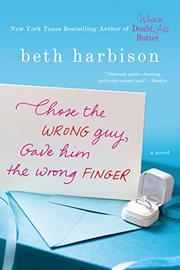 A runaway bride, competing brothers, a potential gold digger and a 30-day “reinvent yourself” challenge provide laughs in this latest from Harbison’s good-girls-making-bad-choices arsenal.

Long ago, Quinn almost had it all: She was moments away from marrying Burke Morrison, high school’s sexiest nice guy and heir to a dreamy Virginia horse farm where Quinn would happily live. That is, until Burke’s older brother, Frank, knocked on the vestry door and dropped a bomb: Burke had been cheating on Quinn. The wedding was called off. A few days later (in a blur of rage and misery), she and Frank drove to Vegas, where they engaged in some regrettable intimacy. Ten years later, Quinn is still wondering what went wrong. Why did she trust Frank’s story? Why didn’t she talk it over with Burke? Ironically, she designs wedding dresses and comforts nervous brides, but her own romantic life is stuck in the deep freeze. When Morrison matriarch Dottie comes in to have a wedding dress made, Quinn gets plenty of opportunity to resolve her issues. Although Dottie has reached her golden years (she’s Frank and Burke’s grandmother), she still wants a little romance and has found it in Lyle, a much younger furniture salesman she met online. When they marry, Dottie will sell the farm (this is unbearable to Quinn, since she spun her best fantasies there), and soon, Frank and Burke will be in town to help her pack up—that is if they can’t dissuade her from marrying what they suspect is a gold digger. Best friend Glenn sees the strain Quinn is under and so creates daily challenges (drink all day long, try speed dating, wear a side pony) in hopes of raising Quinn's courage. With Burke and Frank both in town, Quinn can rehash the past in order to create a future. The question is, which brother will be in it?

Amiable, though the manic narrative style can be grating.