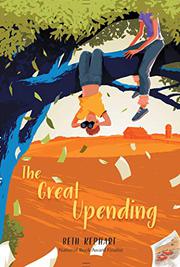 A family struggles to keep their farm afloat and to afford medical care for 12-year-old Sara, who has a heart condition due to a disorder called Marfan syndrome.

Sara and her younger brother, Hawk, are kids who have grown up accustomed to being competent and useful, and their drought-stricken farm, which has been in their family for generations, can use all the help it can get. Since she feels she’s letting her family down, it’s particularly hard for Sara to cope with her diminished physical abilities, and when surgery becomes inevitable, she and Hawk hatch a wild scheme to raise the necessary funds that involves their mysterious, elderly tenant, known to them as The Mister. Lyrical first-person narration from Sara’s perspective—presented in short chapters that occasionally almost take the shape of brief poems—takes its time setting the stage for this tender, classic mystery. The rural Pennsylvania setting and family traditions, such as making half a dozen pies in one go, often feel like throwbacks in time though the novel is contemporary. Older middle graders and young teens with a taste for literary fiction will savor the language and appreciate the quirky, sympathetic characters, who are mostly white, or assumed to be, as race or ethnicity is not specified. Kephart describes her research and writing process in a closing note.

A meandering, gentle, lovely tale of a deeply bonded family, replete with a clever mystery.