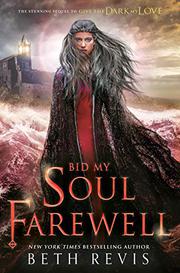 From the Give the Dark My Love series, volume 2

A necromancer and her paramour uncover the truth about their divided empire.

Nedra, a small-town girl–turned–powerful conjurer of revenants, is feared throughout the Allyrian Empire after killing its corrupt Governor Adelaide. Surrounded by her army of reanimated corpses—including her twin sister, Nessie, who needs other souls to not lose her humanity—Nedra tries to navigate the responsibilities she feels to both them and her homeland. Dabbling with dark forces she does not quite understand, she reaps souls to feed to her sister. Handsome Grey Astor, a wealthy boy from a disgraced family who has been quickly rising through the emperor’s ranks, is desperate to help Nedra. As her swelling feelings for Grey collide with her obligations, Nedra discovers that the truth of her necromantic powers and the history of the empire may just destroy both her and Grey. Nedra is a flawed heroine, both strong and loyal, struggling to control a dark power that could subsume her. Revis’ (Give the Dark My Love, 2018, etc.) thrilling conclusion takes its time building, touching upon nuanced issues like economic disparity and wealth inequality, deliberately building into a white-hot conflagration that smolders with intensity. The ending feels a tad rushed but should nonetheless please with its thoughtful mix of romance, dark fantasy, and exploration of abuse of power. Characters default to white.

A slow burn that does not disappoint.