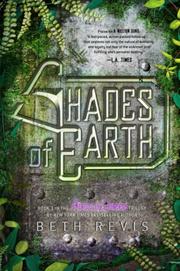 From the Across the Universe series, volume 3

Though not “frexing brilly” like Across the Universe (2011) and A Million Suns (2012), this conclusion nonetheless supplies plenty of suspense and twists to satisfy readers already on the ride.

Desperate to live on a planet, even one with unidentified monsters, Elder and Amy gather 1,456 terrified people onto a shuttle and break away from their life-supporting spaceship to land on Centauri-Earth, a planet with two suns. There’s no turning back: shuttle operation is dubious, and only the prematurely awakened Amy’s ever lived on a planet—Elder’s people were born on Godspeed, a generation ship. Also aboard the shuttle are “frozens,” earthborn scientists and military personnel—including Amy’s parents—who’ve been cryogenically frozen for five centuries, waiting for arrival. On Centauri-Earth, pterodactyllike creatures, toxic flora, sentient beings who won’t reveal themselves, and hostility between earthborns and shipborns (“They’re not our people”) all bring danger. Death tolls soar as Elder and Amy—alternating first-person narration in virtually indistinguishable voices—race to unravel history and mysteries. Romantic focus and purple prose exceed that found in the previous volumes (“I die at the end of each kiss and am brought gasping back to life at the beginning of the next”), which is a pity. Interpersonal relationships and motivations aren’t Revis’ strong point, but action and revelations are.

Strong on setup and plot, weak on human complexities and characterization, this still brings it home on a planet far from home.