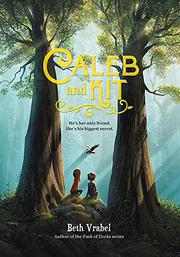 A 12-year-old boy attempts to take charge of his own life.

Caleb, a white boy born with cystic fibrosis, hates being one of only two kids his age in summer day camp. His mom refuses to let him stay home alone while she works, his irresponsible dad is off gallivanting with his new fiancee, and his perfect older brother has a summer internship—with, of all things, the local CF foundation. Caleb’s longtime best friend is busy with football and baseball—sports Caleb can no longer play. When he meets a mystical girl (also white, as all the main characters seem to be) in the woods behind his home, he’s intrigued; when she encourages him to escape the ordinary and to do whatever he wants, he goes along, skipping camp and spending days with her. But Kit is burdened with her own problems and secrets, and what Kit wants them to do is sometimes illegal or dangerous. Caleb’s first-person narration allows readers to sympathize with the frustration and fear that cause him to act out, and it propels the plot to a credible, nuanced conclusion. The cystic fibrosis is well-handled—it affects every part of Caleb’s life but never defines who he is.

A realistic story with strong, recognizable characters that doesn’t reduce cystic fibrosis to a tragedy.