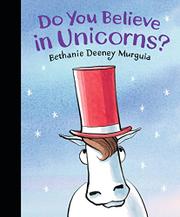 DO YOU BELIEVE IN UNICORNS?

Is it a unicorn or a horse in a hat? It’s up to readers to decide!

A matter-of-fact narrator presents all the reasons why a “horse in a hat” is really just that. It couldn’t possibly be a unicorn. Or could it? As the “horse” trots along, readers will notice other “horses” in the scenery, their heads—and, more importantly, what could possibly be their horns—obfuscated by some detail (a rock, a tree, etc.). Readers may side with the narrator, but soon, the visual evidence seems to contradict the verbal. Even the narrator waffles in their certainty. When a page turn reveals abandoned “horse” hats, the mystery is almost solved. Or is it? Though “horns” clearly crown the “horses’ ” heads in subsequent spreads, they could also be a part of the background (a spire, blades of grass, etc.). The final conclusion in the debate ultimately rests on the readers’ own deductive reasoning. As coy as Jon Klassen, Murguia is a master of subtlety. The interplay between narration and illustration proves the unreliability of the senses, sharing just enough to keep the magic (and doubt) alive. Murguia’s muted pen-and-ink–and-watercolor illustrations, presented almost entirely on double-page spreads, create a lush cartoon world. Careful readers might notice a final hint in the form of a lizard that just might be a dragon—a brilliant punctuation mark to this open-ended story.