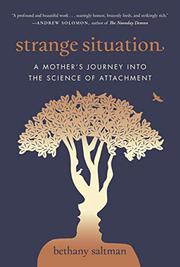 A Mother's Journey Into the Science of Attachment

An examination of the psychological attachment between parent and child from both personal and more detached points of view.

In her first book, Saltman, a Zen practitioner, writes about how she was prompted to look into the research surrounding attachment due to her own ambivalence about life with her young daughter, Azalea. Concerned that her experience with a chilly mother whom the author felt didn't adequately nurture her would prevent her from bonding with the baby, the author began to investigate what she could do to strengthen the mother-daughter bond and be a “warmer, more present, and more loving mom than mine had been.” Saltman’s search led her to the psychological study of attachment theory, including the experiment that gives the book its name. In the clinical research procedure called “Strange Situation,” a mother and baby are brought into a room; the mother leaves and is replaced by a stranger, and then the mother returns. The baby's reaction to the mother's return is used to gauge the attachment style between the two. Saltman grew so fascinated with this tool that she learned how to administer it herself and underwent its adult equivalent, discovering that in fact she was less damaged than she had assumed she was. As she pored over the scientific literature, she became intrigued by the biography of Mary Ainsworth, considered by many to be the mother of attachment theory. Throughout the narrative, the author weaves Ainsworth’s story into her own. As Saltman analyzed her personal history with the help of professionals, she began to understand her early life differently and to forgive and find a greater appreciation for her mother. While some might be concerned that the author accepts the tenets of attachment theory uncritically, she conveys them clearly, and her personal account is both honest and complex.

A thoughtful engagement with a topic that affects all parents.