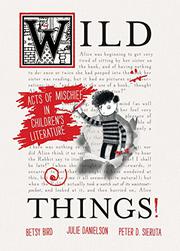 Acts of Mischief in Children's Literature

A chatty inside look at some of the stories that have shaped modern children’s literature.

The authors, three prominent children’s-literature bloggers (Sieruta died in 2012), wear their hearts on their sleeves in this tribute to the chronically underrated art form. Although they open with the hope that their book will serve as a corrective to those who believe that children’s literature is all fluff and bunnies, it’s clear that their audience is their choir. They are far from preachy, however, ranging far and wide in their survey of “mischief.” Exactly what constitutes mischief is rather conceptually fluid, as the authors cover gay and lesbian authors and illustrators, the relative literary worth of series fiction and celebrity publishing, among other topics. Likewise, organization is a little strained, with a “behind-the-scenes interlude” that covers “hidden delights” falling immediately after the book-banning discussion, for instance, but the authors’ enthusiasm and engagement will keep the pages turning. While some of the stories they present are old news to many (Robert McCloskey dosed the models for Jack, Kack, et al., with red wine), others, particularly some fascinating publication histories, will open eyes. The discussion of censorship is particularly thoughtful, both emphasizing intellectual freedom and considering the problematic nature of classic literature amid changing cultural sensibilities.

Though it’s unlikely to reach far beyond children’s-literature scholars and enthusiasts, it will offer that audience a whole lot of enjoyment and no small amount of edification.