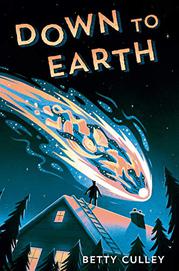 After 10-year-old Henry witnesses the fall of a meteorite, disaster finds his Maine home.

Henry Bower, of Bower Hill Road, comes from a family of water dowsers, but he hasn’t yet shown any talent in this area—his current skills include reading the most books at the library and writing questions about the world in his home-schooling notebook. Henry has a passion for rocks and minerals and is thrilled when he and his little sister find a meteorite to rival the 31-ton Ahnighito in Greenland. An author’s note describes, among other things, the controversy over its fate and the “sad and disturbing history of the Inughuit people brought to New York City, along with the meteorite.” Henry tries to keep it a secret to protect it from similar theft. A paean to science, the text can be laudably earnest (“I learn that no matter how big or special a meteorite is, someone always wants to take it or chip it”) but the dialogue is occasionally stilted. Brief quotes, mostly from nonfiction science resources, open each chapter, intriguing readers who might otherwise wonder where Henry’s narrative is going and why. The flood that overtakes Henry’s house traumatizes his family, especially when some people in the town blame them for it, but Henry shows impressive kindness and resilience. The main cast reads as White; a visiting scientist who mentors Henry is Black.