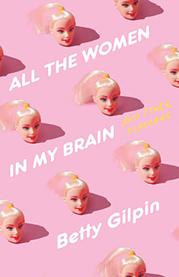 ALL THE WOMEN IN MY BRAIN

A young, accomplished performer’s life in theater, TV, and film.

In this comic memoir, Gilpin (b. 1986), best known for her role as a female wrestler in the Netflix series GLOW, charts her journey as an actor and offers advice for other young women pursuing a similar path. The author chronicles her childhood as the daughter of show-business parents; awkward adolescence and struggles to reconcile self-doubt and artistic ambition; hard-won ascent in her chosen industry and routine endurance of humiliating tests of her professional resolve; and, finally, disappointment after the commercial failure of the film she hoped would launch her to superstardom. Gilpin is genuinely funny as a commentator on her own misadventures, though her style is sometimes overly clever and strained in its cultivation of zaniness. A challenge for Gilpin in telling her story is to present herself as an amusingly hapless underdog despite being blessed with good looks, a loving and prosperous family, and professional success. That challenge is best met in her descriptions of the ludicrous, and often grotesquely exploitative, environment of the entertainment industry, which she skewers with an insider’s wisdom. On the other hand, the author’s generalizations about cultural misogyny and gender inequities are somewhat trite and predictable. In noting an existential binary that has troubled her own self-identity for much of her adult life, Gilpin suggests, for instance, that “we womenfolk today are faced with a decision: Salem or Barbie”—i.e., a stark choice between stridently asserting one’s independence or submissively appealing to others as a sexual object. The writing comes alive, however, when the author digs into the specific indignities she endured during her journey through the gauntlet of endless auditions and the merciless whims of those who orchestrated them.

A quirky tale of lessons learned from the world of acting.