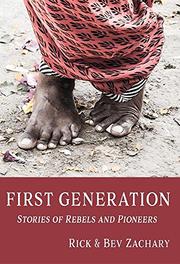 A couple who worked as Christian missionaries in Nepal deliver a debut collection of remembrances.

The Tharu are an ancient people who live on the border between Nepal and India. Many of their customs, particularly those related to their practice of Hinduism, are so well-preserved they function like a cultural fossil of Mesopotamian Babylon. Nepal was, until 2008, the only Hindu kingdom in the world, and historically, Christianity was prohibited. But a Maoist uprising and a democracy movement in the 1990s created the possibility of an openness to the Gospel despite the hostility of Maoism to religion in general. In fact, after Maoists officially disarmed and won representation in parliament, they strategically formed a coalition with Christians, preparing the possibility for a genuine religious movement of first-generation believers. Bev and Rick Zachary lived in Nepal during this revolutionary time, both witnesses and participants in the country’s religious transformation. They skillfully relate a striking series of sometimes-interlocking stories that chronicle the joys and tribulations of conversion, often conveyed from the perspective of a native based on interviews. For example, Dakt, a young boy whose father, Deepnath, is a respected Hindu priest, converts to Christianity, a decision that creates an angry rift between the two. But Deepnath later becomes sick and moves in with the adult Dakt and his family, creating the potential for mutual forgiveness between the father and son. In another remembrance, the writers tell the enthralling tale of Sarah and Datta, a young couple married as Christians, no easy feat in a world traditionally dominated by arranged Hindu unions. The authors’ prose is direct and succinct, and they express with impressive sensitivity and sympathy the experiences and worldviews of those they interview. And while their memoir is mostly inspiring, they don’t shy away from cataloging the more unseemly elements of Nepalese life, including intramural violence and the sexual trafficking of the young and vulnerable. The heart of the engrossing recollection, though, is the simple beauty of the Tharu’s brand of religious piety, uncomplicated by abstruse theological commitments and, as a result, emotionally unvarnished.

A captivating anatomy of religious conversion.

WHILE THE GODS WERE SLEEPING
by Elizabeth Enslin
Fiction

THE CONVERSION
by Joseph Olshan
Indie