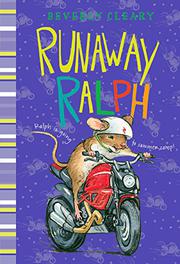 The return of The Mouse and the Motorcycle is a departure—from the wide-open corridors of Mountain View Inn to a cage that's also a vantage point in a typical summer camp; but tipping the balance from fantasy to personality doesn't throw freedom rider Ralph. At least not for long. Caught in a generation gap between his timid, crumb-scrounging elders and a horde of little cousins clamoring to ride his shiny red motorcycle, he takes off—speeded by the new force of gravity—for Happy Acres Camp. But watchdog Sam and smug Catso have other ideas, and Ralph's not sorry when new-camper Garf's butterfly net makes him a permanent exhibit in the craft cabin (though the girls' itsy-bitsy, teeny-tiny squeals are a little hard to take). Spinning full circle on his exercise wheel is "as dangerous and exciting as riding a motorcycle" until golden (his emphasis) hamster Chum grumpily reminds him that he's not going anywhere. Then Ralph pins his hopes on Garf, a boy who might understand that Pb-pb-b-b-b-b is the way to make a toy motorcycle go. in the wacky, camp-wise, anything-but-mousie wind-up, he turns the tables on Catso, clears loner Garf of the theft of a watch, and earns his return. . . to the now-valued vistas of Mountain View Inn. The irresistible drawings—of Ralph bent over the breakaway bike, of Catso toying with him to impress his offspring, of Ralph curled up in a Dacron sleeping bag—attest to the rightness, and the sadness, of Mrs. Cleary's dedication (To Louis Darling, 1916-1970). Happily, Ralph will be tearing along in his ping-pong ball crash helmet for a long time, on the elusive trail of peanut-butter-and-jelly sandwiches and boys who go Pb-pb-b-b-b.