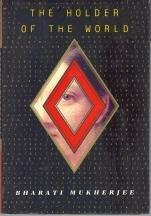 THE HOLDER OF THE WORLD

From Mukherjee (The Middleman, 1988; Jasmine, 1989, etc.), the tale of a 17th-century American girl who ends up an emperor's mistress in India. Hannah Easton, born in 1670 in the forests of Massachusetts, at age 15 moves to Salem with adoptive parents after her father dies of a bee sting and her mother—during the French and Indian War—runs off with a lover from the Nipmuc tribe. Having witnessed scalpings and worse, and harboring the terrible secret of her mother's having gone over to the ``barbarians,'' Hannah is a deeper well than most young girls, suffering trance-like illnesses but also excelling at needlework—including the surgical variety, learned in the war. Her oddnesses, though, are no impediment to marriage with the dashing adventurer Gabriel Legge, who takes her first to England, then to India, where Gabriel joins the East India Company before going independent as a pirate—a calling that will bring him fame and wealth, but also, at last, death. And Hannah? Her story is never simple, nor are her dealings either with English colonial society or with native Indian society, and in time she will become nothing less than loving mistress—or ``bibi''—of the Raja Jadav Singh, will survive a religious war, save her lover's life (through surgery), slay a victorious Muslim general, plead for peace before the Emperor Aurengzeb himself, then barely survive a second war—and possess an invaluable gem—before at last going home to Salem, where her life, along with that of her daughter (named, interestingly, Pearl), will continue quietly for some time. The narrator is a present-day American woman, an ``asset hunter'' whose assiduous research into the past is motivated as much by a desire for understanding as for money; her voice allows Mukherjee's enormous learnedness here to be worn lightly, and pulls her story along like a merchantman under full sail.