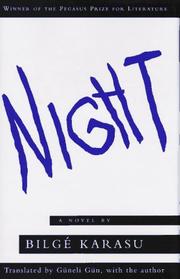 Winner of the Pegasus Prize for literatures rarely translated into English, this novel introduces an experimental Turkish novelist to American readers—a rare find indeed. Karasu begins with all the standard clichÇs about night- -blackness, secrets, curfews, murders, fears at their height; he then proceeds to extend these banalities so far that the images they produce seem ingenious. The horrorscape he depicts is reminiscent of Chile or El Salvador, where people suddenly ``disappear.'' Characters are constantly under surveillance by the night's commanding forces; even chancing upon a forgotten notebook could lead to the finder's death. Writing to stave off madness, the narrator (or is it four different narrators?) says in a ``footnote'' to his writing: ``The main thing is to keep the reader from sensing that some of these paths won't take incidents or anybody anywhere....'' While on one level the whole book consists of ruminations on the act of writing, the product itself is not taken very seriously: ``[P]eople are put to sleep through the use of words.'' Letters are never sent; authors attempt to retract words spoken or written earlier. And they have no compunctions about publishing under someone else's name. If an image or a name is used more than two or three times, it's destined to become a metaphor: N. for ``night'' (or is it ``narrator''?), a deaf schoolmate for the writer ``deaf to the world.'' One unnamed narrator even comments on how many people are so self-involved that if tragedy (such as the well-plotted murders of the night) does not affect them directly, they go about their business pretending it doesn't exist. While it might seem odd to find such crafted postmodernist writing coming out of Turkey, Night reads so smoothly that we forget it's a translation.