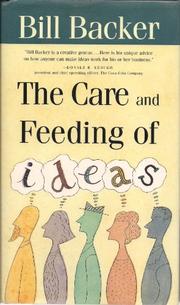 THE CARE AND FEEDING OF IDEAS

Songwriting adman Backer (as in Backer Spielvogel Bates Worldwide) tells, in some detail, how he did it. What Backer did was spawn the Coca-Cola commercial that evolved into ``I'd Like to Teach the World to Sing.'' His pride in his accomplishment is, unfortunately, unbounded. The author—sort of the Barry Manilow of ``the song-form commercial'' (don't call them ``jingles,'' please)—uses the story of the successful soft- drink campaign as a peg on which to hang a book full of bloated expostulation. With the pride that is emblematic of his trade, Backer offers some big talk about ``big ideas,'' the profane Grail of the knights of Madison Avenue. His theory is that original ideas require nurturing from ``families''—sponsoring uncles, aunts, and godparents—and powerful folk who can give the affirmative nod to new notions. Reasonably, he reminds us to separate ideas from their execution. But it's all inflated and never strays far from the author's singular creative accomplishment. (He simply wanted to sell the world some soda pop with ``I'd like to buy the world a Coke''—a real example of pop culture.) To be sure, it's not uniformly dull. The narrative picks up with a description of the Coke shoot, and a few bits of Ad-land gossip help to relieve the tedium. Curiously, Backer has a tin ear for the English language. He innovates with the odd inverted clichÇ (``far and few between'') or inattention (someone ``is yet'' to perform a task). A false self-helper in which the author helps himself to some congratulation. Persuasive texts in this genre are few and far between, indeed. (Illustrations—not seen)