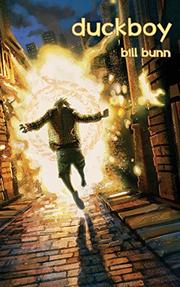 A teenager takes up alchemy where his suddenly vanished mom left off and falls afoul of police, vicious thugs and a digital intelligence determined to separate him into generic components.

Battling grief and a loser mentality (the latter reinforced by widespread derision after a quixotic attempt to save a duck frozen into a pond), Steve is electrified when his eccentric great-aunt Shannon transforms an ordinary “clock” into a “lock.” She informs him that he, too, can use words to work transformations—and perhaps discover what happened to his mother. Stronger on action than logic, the plot then proceeds to evolve into a wild tangle. On the one hand, Steve is pursued by police for a series of kidnappings and house trashings that are actually the work of rival alchemist John Dee and his murderous crew, and on the other, he travels back and forth between this plane and a “World of Pieces” where everything is made of numbers and a hypnotic voice urges him to dissolve into a protean liquid. Bunn works a predictable transformation on Steve, who rescues everybody, and caps his debut with a tidy, melodramatic, thoroughly contrived happy ending.

The premise is better than the execution, but readers who aren’t bothered by arbitrary notions and unlikely situations will enjoy the nonstop action.