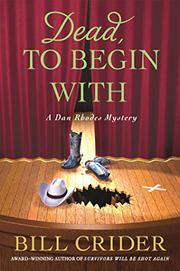 DEAD, TO BEGIN WITH

A Christmas Carol comes to Blacklin County, Texas, in the form of a production that leaves Sheriff Dan Rhodes (Survivors Will Be Shot Again, 2016, etc.) wondering just who made Jake Marley a ghost.

For some years now, it’s taken quite a bit to coax reclusive oil heir Jake Marley out of his shell. But he’s made an unexpected splash in spearheading the restoration of the Clearview Opera House, which is scheduled to reopen with a production of A Christmas Carol scripted by local community college professor Harry Harris. Unfortunately, Jake’s made a splash in the worst way possible: by dying onstage during the theater's renovation—maybe by falling from the catwalk, maybe by more nefarious means. There’s no shortage of suspects, since Jake’s recently written will specifies that if his money is going to keep paying for the renovation, all the major roles in this production of Dickens' hardy perennial be taken by people with a close connection to Jake's sister, Gwendolyn, who was killed many years ago in a car crash. From beyond the grave, Jake decrees that Gwen’s best friend, insurance agent Glenda Tallent, play the Ghost of Christmas Present and that her high school swains Ed Hopkins, Al Graham, and Ron Gleason fill out the roles of Ebenezer Scrooge and the two remaining ghosts—even though most of the parties concerned scoff at the prospect of treading the boards. It’s up to Sheriff Rhodes to take enough time from Blacklin County’s all-you-can-eat buffet of low crimes and misdemeanors, idle gossip, and dumb behavior that doesn’t rise to a criminal level to figure out who arranged for the ghost of Jacob Marley to be played by the ghost of Jake Marley.

As usual in this gently humorous series, Crider pads out the slight mystery with enough anecdotes, updates, and digressions to make fans feel as if they’ve scarcely been away since Survivors Will Be Shot Again (2016).