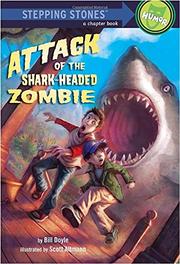 ATTACK OF THE SHARK-HEADED ZOMBIE

Aimed straight at proto-Goosebumps fans, this formulaic series opener pits two 9-year-olds against a great white shark with legs. Having lost his bike in a lake thanks to the latest hare-brained scheme of his impulsive cousin Henry, bookish Keats reluctantly agrees to finance a replacement by earning some money taking on odd jobs at a spooky local mansion. The prosaic task of weeding the garden quickly turns into an extended flight through a series of magical rooms after a shark monster rises out of the ground and gives chase. Dashing from one narrow squeak to the next, the lads encounter a kitchen with an invisible "sink," a giant vomiting bookworm in the library, a carpet pattern in the hall that (literally) bites and, most usefully, a magic wand that they get to keep (setting up future episodes) after spelling the monster away. Tilted points of view give the occasional illustrations more energy than the labored plot ever musters, and the characters rarely show even two dimensions. Fledgling readers will do better in the hands of Jim Benton’s Franny K. Stein series or Bruce and Katherine Coville’s Moongobble and Me books. (Horror. 8-10)