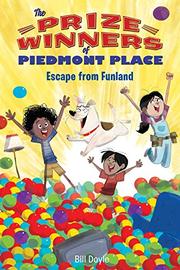 From the Prizewinners of Piedmont Place series, volume 2

The Talaska family enters a contest to have their ramshackle house made over by a crew of amusement-park clowns. What could go wrong?

Somehow this sequel to Prizewinners of Piedmont Place (2016) never really ignites, despite heaps of seemingly surefire comic gold. These morsels include an exploding washing machine and an entire house refitted with trap doors and other thrills…not to mention repeated appearances by the wildly frantic Funland Clown Patrol. Having found their true calling as a clan of competition winners, the Talaskas confidently tackle the Funland Fun House Makeover Contest—which requires gathering over 1,000 “likes” in two days from the neighbors and then finding a treasure hidden in the sponsoring amusement park. Being built around a laughing, loving, mixed-race family with complementary talents, the tale has a strong foundation. But the plot is just a series of loosely connected set pieces with a mishandled climax (the Talaskas find the “treasure” immediately, then take days to realize it despite obvious clues) and a happy ending engineered deus ex machina–style by a late-arriving surprise ally. The clowns and rest of the supporting cast likewise come off more as props than people. Finished illustrations not seen.

The opener offers hope that Doyle can do better than this forced effort to capitalize on a solid premise and main cast.