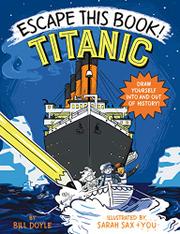 From the Escape This Book series

Fear of death propels readers to escape the sinking Titanic in this doodle-your-own-adventure book.

Onboard the Titanic, “you” must choose one of three potential characters: a second-class passenger (male, European descent), a crew member (male, race unspecified), and a stowaway (gender and race unspecified), and try to escape the ship’s doomed maiden voyage. As “you” doodle on, punch through, tear, and fold the pages, “you” encounter historical figures such as J. Bruce Ismay, the chairman of the White Star Line, and Capt. Edward John Smith (both male and white) and learn about the many decisions that condemned the Titanic to failure. Doyle ups the ante in choosing the correct path as death lurks around every corner. Drowning, freezing to death, and drifting off into the cold night are only a few of the tragic endings waiting for those who aren’t expert “escapologists.” However, with the guidance of a helpful gopher (an actual animal) that returns “you” to the last checkpoint, “you” get multiple chances of avoiding demise. With more tragic than happy endings, this book might seem a cavalier take on a catastrophic event to readers who don’t appreciate graphic descriptions of death and dying, punctuated as it is with exercises such as drawing “a bowl of cold and slimy noodles on a passenger’s head” and pretending to tap out “She’ll Be Coming ’Round the Mountain!” on Sax’s lineup of partially filled wineglasses. The three difficulty levels show the socio-economic dynamics of maritime travel in 1914, giving fewer chances of survival to stowaways and crew members.

Interactive adventure book full of historical facts—though not for the faint of heart.