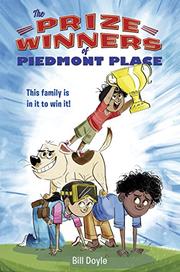 THE PRIZEWINNERS OF PIEDMONT PLACE

From the Prizewinners of Piedmont Place series, volume 1

Eleven-year-old Cal resorts to extreme measures to rope his reluctant family into taking a chance to win a shopping spree in the local megastore.

Strong family ties and social-class contrasts lie at the center of this sitcom-style farce. Eyes firmly fixed on a video-game system that is well beyond his struggling family’s reach, Cal Talaska responds to the contest announcement with a series of stratagems that turn his close but initially indifferent clan into a motivated team. The Talaskas need all the moxie they can summon. Their main rivals as the contest goes through multiple tricky elimination rounds turn out to be the Wylots—arrogant, upper-crust owners of the factory where Mr. Talaska is employed as an accountant—and they’re not at all shy about playing mind games, uttering thinly veiled threats, or out-and-out cheating. Doyle leans hard on the moral divide by thoroughly demonizing the Wylots while casting the Talaskas as a caring, mutually supportive family that laughs as heartily as it pulls together. He does rather overplay the feel-good ending, but their win is well-deserved. In quickly sketched ink-and-wash illustrations, Jack portrays them as biracial (Mr. Talaska is the darker parent), though their diverse skin tones on the full-color cover even out in the interior images.

The hero is really the entire family in this somewhat labored but cockle-warming series kickoff.