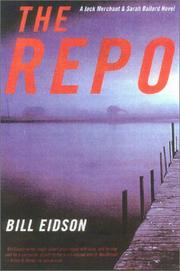 Having blotted his copybook, ex-DEA agent Jack Merchant is spending early retirement desultorily skippering his sloop Lila in and around the marinas of Charleston, Mass., looking forward to not much. His life is on hold: He knows it, hates it, seems stuck with it until the sudden entrance of repo woman Sarah Ballard, holder of past due “bank paper” on the Lila. Sarah and Jack are not strangers to each other. Five years after their paths crossed in a way that brought them close for a while, Sarah’s used the threat of repossession as an obvious pretext to engineer a reunion because she needs Jack’s help. Owner of a struggling business, she’s a make-or-break client with an assignment she fears might be too great a stretch. MassBank wants her to find bank VP Paul Baylor and his wife, a thoroughly respectable, well-heeled young couple who’ve made off in their boat, very possibly with a pile of MassBank cash. Get results in a week, Sarah’s been told, or consider yourself repo non grata. Teaming up efficiently, Sarah and Jack locate the Baylors, but that proves much easier than tangling with the spider they find at work, perverted, pernicious, poisonous, weaving his tangled web for the Baylors—and, as it turns out, for Sarah and Jack as well.

Expert prose, brisk pacing, and a complex plot. But what really makes this first of a series Edison’s (Frames Per Second, 1999, etc.) best yet are the flawed, hurt, exceptionally sympathetic central players.