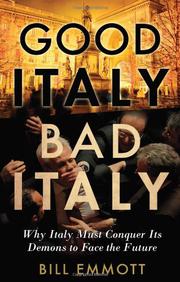 Why Italy Must Conquer Its Demons to Face the Future

The former editor-in-chief of the Economist finds a few bright spots amid the dark economic clouds in post-Berlusconi Italy.

Expanded and updated since its 2010 publication in Italian, this brisk journalistic account by Emmott (Rivals: How the Power Struggle between China, India, and Japan Will Shape Our Next Decade, 2008, etc.) argues that Italy’s current financial crisis eerily echoes the previous one of 1992-1994, and that understanding why meaningful reforms failed to be enacted then may help Italians do better this time. He dismisses as unhelpful in this effort the traditional distinction between the wealthy, industrial north and the poor, rural south. Instead, Emmott discerns a “Bad Italy…selfish, closed, umeritocratic and often criminal,” and a “Good Italy…more open, community-minded and progressive.” As examples of the Good Italy, he offers social movements such as Addiopizzo (“goodbye bribes”) and Ammazzeteci Tutti (“kill us all”), an anti-mafia group. Emmott also visits and praises various nimble new businesses that have managed to thrive despite restrictive labor laws and a glacially slow judicial system that makes it extremely difficult to enforce contracts. The slow food movement in Turin, a cashmere exporter in Perugia and a company that manufactures sophisticated measurement devices are among the author’s examples of the kind of dynamic capitalism Italy needs. However, these praiseworthy efforts don’t immediately address the problem of Italy’s massive debt, which occurs in the context of a global economic crisis due in large part to the kind of unrestricted, unregulated capitalism the author seems to be advocating, despite a brief acknowledgement of the banking industry’s excesses. When Emmott praises Ireland’s governing institutions for becoming “from the late 1980s onward…more efficient and less profligate,” without making any reference to the fact that Ireland is now experiencing a financial crisis at least as severe as Italy’s, it’s difficult to entirely trust his prescriptions for economic health.