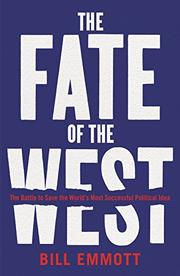 THE FATE OF THE WEST

The Decline and Revival of the World's Most Valuable Political Idea

The West is premised on political and economic ideals that are under threat—from Beijing, from Moscow, and from Washington, D.C.

Emmott (Good Italy, Bad Italy: Why Italy Must Conquer Its Demons to Face the Future, 2012, etc.), former editor-in-chief of the Economist—which is seen as conservative just about everywhere except the U.S.—holds that the West is as much an idea as it is a geographic entity: the West is found in Seoul, Tokyo, and Kuala Lumpur as well as Paris and London. It relies on the operation and staunch defense of several principles, first among them relative equality of income and opportunity as well as openness—i.e., a society that is “open to new ideas, new elites, new circumstances and new opportunities whether of trade in goods and services or of culture and science.” An open society is thus one of porous borders rather than of walls, friendly to free trade agreements as opposed to protectionist tariffs, outward-looking rather than nationalist. There have been many well-documented studies of inequality, but Emmott’s appeal to openness recalls arguments not heard since Karl Popper, ones that are now broadly unwelcome anywhere that the words “liberalism” and “liberal democracy” are viewed with suspicion. Emmott examines aspects of inequality, international affairs, and the failures of one ideal or another in actual practice. As he notes, with respect to the abandonment of free trade agreements, if you pick a fight with a foreigner, a foreigner is likely to pick a fight with you, and “to deal with…enemies, the West’s greatest asset in the past has been its friendships,” friendships likely to be lost to isolationism and the resulting reshifting of world power relations. Emmott uses plenty of facts and figures to support his argument, which is profoundly one of ideas—and how the idea of the open, free, Western society is better than that of authoritarianism.

Good fuel for those who think that the sitting U.S. president is the worst thing to happen to democracy since Xerxes.