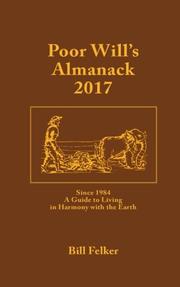 A Guide to Living in Harmony with the Earth

An annual almanac attempts to predict weather-related phenomena based on patterns observed in previous years.

The almanac begins with an introduction giving a brief overview of the information provided in the monthly sections. Felker (Poor Will’s Almanack 2015, 2014, etc.) also explains the dominical forecast, which is a method from the Middle Ages based on the date on which the first Sunday of a year occurs; for 2017, readers can apparently expect “great conflict and fighting among robbers and new tidings of kings.” An overview of what the author calls “the Forty-Eight Seasons” follows, in which he breaks each season into smaller parts and describes what happens at those times. Each monthly section begins with a quote followed by a brief essay by Felker and then various astronomical and predictive details. First he presents information about the states of the moon, planets, and stars during the month and a list of holidays. Next appears a S.A.D. Stress Index. This index “is one way of measuring those natural phenomena which are assumed to be related to seasonal affective disorder (S.A.D.): the day’s length, the probable percentage of sunlight, and the weather.” Then the author offers a discussion of when to best perform gardening and animal husbandry tasks; a list of cold fronts and related weather events; and a reader-submitted story. Finally, Felker delivers a brief autobiography. The author’s pseudo-scientific explanation of the moon’s effect on weather and animals is somewhat dubious, and the dominical forecast is downright astrological. Of more value are his descriptions of the seasons and when to expect which natural events; his gardening advice should also prove helpful. Felker’s essays verge on poetry, and his reader stories are amusingly nostalgic. And his names for various moons throughout the months—such as the Robin Chorus moon and the Sweet Corn moon—remain an intriguing way to tie the passing of time to expected events in the natural world.

While the weather forecasts may be debatable, this almanac still features beautiful essays by the author and some useful details about seasonal events and gardening.