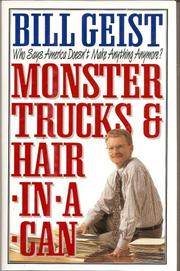 A random walk through the entrepreneurial outskirts of postindustrial commerce and show biz with a tour guide whose spiel has a nasty edge to it. Drawing on stories he has reported as a CBS TV correspondent, Geist (Little League Confidential, 1992, etc.) offers a discontinuous series of short takes on offbeat enterprises that have yielded the venturesome Americans who launched or embraced them modest amounts of fame and fortune. Cases in point range from the leading breeder of racing pigs through the inventor of the car- crushing leviathans known as monster trucks and Florida's top vendor of recycled golf balls to the two struggling illustrators who created Teenage Mutant Ninja Turtles. Covered as well are the proprietors of nail-care salons, traffic-safety schools, and the seemingly endless parade of lurid talk shows on daytime television, plus the resourceful aerospace engineer who first thought of blasting bullet holes in wearing apparel as a lucrative fashion statement. In most instances, unfortunately, the author goes beyond poking gentle fun at his subjects and their antics; indeed, he invariably holds them up to gratuitously savage ridicule. Nor can Geist resist any opportunity to show what a clever fellow he is, even when a straightforward account of junk entertainment like ``American Gladiators'' could speak for itself. All too often the effect is akin to the tedious pall cast by a stand-up comic who, bedazzled by his own wit, can't bear to leave the stage. While the author closes with backhanded homage to Judge Roy Hofheinz (builder of Houston's pace-setting Astrodome), a start-to-finish audit of his other vignettes reveals that they reach no particularly startling conclusions about the latter-day US or any other substantive matter. Sporadically amusing but wholly dispensable.