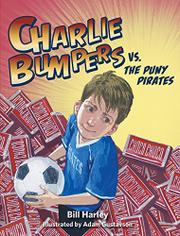 CHARLIE BUMPERS VS. THE PUNY PIRATES

From the Charlie Bumpers series, volume 5

Master storyteller Harley scores again with fourth-grader Charlie Bumpers and friends as they suffer on a losing soccer team.

Charlie, Hector, and Tommy could be the best soccer trio in history if only they could play offense at the same time. Why can’t coach Mr. Carmody see that? Harley’s fifth book in the Charlie Bumpers series sets the scene on the soccer field instead of the classroom or the school stage. Deftly straddling the gap between slapstick-level soccer beginners and serious preteen athletes, the Pirates focus on fundamentals while getting shellacked by all their opponents. Since winning a game seems elusive (although all the adults say they never keep score), the three friends pool their resources selling chocolate bars for the fundraiser. Maybe they can win that prize instead! Harley paints a world immediately familiar to most 9-year-olds and embellishes it with the high jinks that life provides. Charlie’s soccer team is terrible. Charlie’s family drives him crazy. Charlie loses the fundraising money. Nothing life-threatening, nothing alien, just honest-to-goodness growing up while learning to play for the love of the game. The surprise is that it is suspenseful, hilarious, and revealing, with no tidy solution at the end. This is a quick and easy read, comforting and diverse even if suburban; in addition to white Charlie, African-American Tommy, and Latino Hector, the Pirates are a nicely multiethnic team.

A sixth book in the series is expected, to the delight of Charlie’s fans.