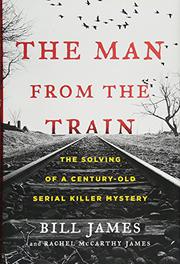 THE MAN FROM THE TRAIN

The Solving of a Century-Old Serial Killer Mystery

A baseball detective attempts to solve a homicide cold case.

With his statistics-driven “abstracts,” James (The Bill James Handbook: Baseball Info Solutions, 2017, etc.) is famous for revolutionizing the way fans look at baseball. Here, the author and his daughter deliver a provocative book that employs his prodigious research techniques in an effort to solve a famous, 100-year-old mass murder case. Murders, actually, as their research on this case led them to a startling conclusion. On June 9, 1912, in Villisca, Iowa, a family of eight was brutally murdered with an ax at night in their home. No one was ever convicted. James believed other, similar mass murders might have occurred around the same time: “And then I found one, and another one, and another one. I hired my daughter as a researcher, and then she started finding them.” The authors’ research uncovered at least a dozen similar murders from 1909 to 1912 that occurred from Virginia to Oregon to Kansas, 48 murders in all. They kept digging and found a few dozen more during the period 1900 to 1906, with the locations ranging from Nova Scotia to Arkansas to Florida. The authors became convinced they were committed by one person. The murderer’s modus operandi revealed a pattern: he worked for a living, probably in mining or logging, committed the crimes on weekends with an ax, often burning down the house, and didn’t steal anything. Since the murders were always close to train lines, the authors figured he traveled by train. Eventually, they came up with a suspect. They include detailed discussions of investigative techniques back then and stories about people wrongly (they feel) executed for the crimes. Told in workmanlike, journalistic prose with plenty of personal injections—“hear me out. Have I got a story to tell you”—the narrative becomes addictive, and it’s easy to get caught up in the elaborate search and the authors’ conclusions, which are plausible.

Fans of true crime—as well as detectives in homicide bureaus—will relish this book.