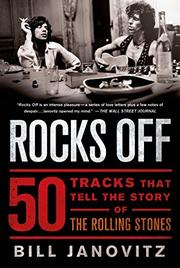 50 Tracks that Tell the Story of the Rolling Stones

With all the hoopla surrounding the band's 50th anniversary and the tour celebrating that milestone, a book about 50 significant Stones recordings could have practically written itself. But it wouldn’t have written itself nearly as well as Janovitz has; close listening and an ear for detail distinguish his analyses. By concentrating on the recordings—and not even albums as a whole, but specific tracks and singles—the author shifts the focus away from the band’s live performances and offstage notoriety, taking the spotlight off Mick Jagger to explore the crucial yet underacknowledged contributions of bassist Bill Wyman. Janovitz also demonstrates just how important Brian Jones was in the development of the band’s music and persona, while underscoring the subsequent virtuosity of Mick Taylor. As a musician, he highlights elements within the arrangements that might escape even a passionate fan. Yet Janovitz too is “an unabashed fan," and his enthusiasm serves him well—though to describe “Jumping Jack Flash” at this late date as “one of their greatest songs...commanding and ballsy” would seem to belabor the obvious. The author experienced the music of the Stones' glory days after the fact; when he gets to “Angie,” he notes that it was “the first Rolling Stones single I remember hearing contemporaneously,” which means that he can only imagine the immediacy and context of hearing the band's musical progression as it unfolded. Nonetheless, his insights are shrewd and should inspire listeners to return to the recordings with fresh ears, recognizing that the Stones are more than Mick and Keith.

Even fanatics will learn something here.